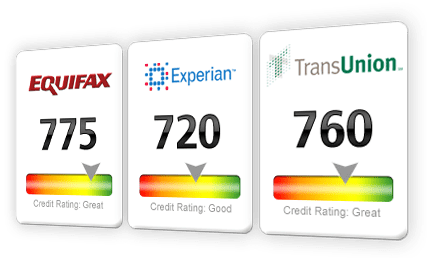 The credit score of any individual is actually a statistical analysis of various factors in one’s credit file. In layman’s terms, they dictate the creditworthiness of a particular person, which calculates whether the individual will repay any borrowed funds to the lender. There are 3 credit scores in the United States, and each has its own guidelines and information collected and kept on file. It is then analyzed to make assessments and calculate scores. The three major bureaus include Equifax, TransUnion, and Experian, all of which do not take into consideration the consumer’s income. Basically, they help calculate the risk involved to lenders to lend money to the consumer applying for credit.

Of the 3 credit scores, FICO, formerly known as Fair Isaac Corporation, is the most popular. It is this one that major mortgage lenders use to weigh the possibilities of whether the potential mortgagee will default on their payments and financial responsibilities. Their scores will also differ, with FICO scores ranging between 300 (the poorest) to 850 (the best). The average American has a FICO score of 723. It is the leading model of credit scoring used in North America, although there are other, less significant ones. In addition to that, the different bureaus also use their own scoring models, with Equifax using ScorePower; and TransUnion’s scoring model is known as VantagePoint, and it ranges between 501 (the poorest) to 990 (the best). The predictions of risk may differ greatly, from one bureau to the next.

Interpreting scores begins with identifying the credit score source and its purpose. The algorithms FICO has put in place are different for the different uses of credit, like for an automobile loan, a home loan, or a credit card. The predictions are based on the likelihood of the consumer surpassing 90 days past due on an amount owed. The lower the score, the greater the risk to the lender. However, this will commonly yield different results for the same consumer, as the score will depend on what the use of the credit will be for.

Most lenders will use 1 of the 3 credit scores provided by the major bureaus to determine whether the applicant is qualified for a loan. Another factor that the 3 credit scores provide is the interest rate that an applicant qualifies for. For instance, someone with a lower score will, if accepted for a loan or credit card, pay higher interest rates than a consumer with a higher score. In addition to credit card companies, banks, and mortgage lenders, others will also use 1 of the 3 credit scores for their own purposes. These include, but are not limited to insurance corporations, cell phone companies, and even landlords. Landlords will use it to determine the likelihood of receiving rents in a timely fashion by potential tenants. Cell phone companies will refer to the applicant’s credit history and score to determine if payments will be made according to the agreements, and insurers will refer to it decide on insurance premiums for the particular client.

Consumers are granted one free credit report per year, from each of the major bureaus. They are not, however, granted any of the 3 credit scores for free, as they must pay for this information, which costs about $10, and they can also be acquired directly from FICO (Fair Isaac). However, according to the bill recently passed, with regards to Wall Street reform, a consumer may acquire a free credit score upon being denied insurance coverage or a loan, as a result of the credit score.

While the 3 credit scores are created and used to predict the trustworthiness of a consumer, the risk is always there. Numerous personal and outside factors can interfere with a consumer’s ability to pay in the future, even if that consumer has had the best credit history and score. Although the calculations to qualify or refuse a consumer for a loan may seem harsh from the above information, there are other factors that are carefully considered, in addition to them. As there are 3 credit scores, no one credit score can be used as a final decision because, other scoring is used in the calculations, there are other scores developed that are also used by some lenders, and there are differences between the scores reported by the different bureaus.

Scores will change according to the use of your credit. The 3 credit scores will have an affect on whether you are approved for a loan, the amount, and the terms of the loan. As so much is riding on a consumer’s report, it is important to take the right steps to help improve the score, which will open doors to more, and better, credit. Anyone of the 3 credit scores are a direct reflection of at least one account that has been opened for a minimum of six months, and has been active at least once in that period of time.

Having said that, it is important for the consumer to understand that, although the credit report will change at every month, and according to use thereof, the credit score will take much longer to increase. It takes time, patience, and diligence to ensure it is steadily increasing. Any errors, even innocent ones where the consumer is not responsible for, will result in a decrease in the score, and is not capable of a manual correction. In such a case, a written letter from the credit reporting agency would have to be issued to the consumer to prove that fact.

Therefore, it is imperative that the consumer is responsible by checking his or her credit report and credit scores regularly, and thoroughly. The importance of having good credit is second to none, in this day and age and so, it should be treated and handled with the utmost care. In addition to innocent problems, there is always the risk of falling victim to fraudulent activities, which could destroy a consumer’s name. The rebuilding process will be a long and difficult road, especially if it was left unattended for too long. Regular checks will avoid this from occurring.